Investors are increasingly being encouraged to buy tracker funds which only seek to match a stock index, rather than trying to beat it. Academics and passive investment companies have been pushing the idea that we would all be better off in these funds because of their lower charges. A YouTube documentary, advocating passive investing, now has over a 100,000 hits. The result of this marketing push and lower costs has been a surge in tracker investments. Passive funds now account for 25% of the US market and 11% of the UK market.*

Academics have been some of the biggest proponents of passive funds. Financial theory is heavily influenced by the efficient market hypothesis, the idea that markets are always efficient and never miss-priced. Eugene Fama, the creator of the original theory, was recently honoured by winning the Nobel prize in 2013. If markets are always efficient, active managers should not be able to outperform their benchmarks and therefore advocates of passive investing believe in the theory. This has encouraged many academic studies which have attempted to prove that investors would be better off investing in passive funds. A Cass business study published last year was very critical of the active management industry.**

However, the evidence of active versus passive funds doesn't back up the academic theories. In fact, UK managers didn't just beat passive funds over the past five years, they absolutely crushed both them and the benchmark indices, yet if you listened to the press you would never believe this was the case.

The average fund in the IA UK All Companies Sector returned 76.35% over the past five years and the average IA UK Equity Income fund returned 80.48%. That was 20% more than the average passive fund, 21% more than the FTSE 100 and 14% ahead of the FTSE All Share after all fees.*** An astonishingly high difference and something that most academic theory would say was completely impossible.

That's not even the end of the story. Not only did the average UK Equity Income manager beat the market by 14%, they also did so with less volatility than the market, giving far superior risk-adjusted returns.

How have active fund managers outperformed?

One big tailwind for UK active managers has been the outperformance of mid-cap companies. Active managers typically have an overweight to this area of the market so this has been a big benefit. But this in itself cannot totally explain the difference between actives and passives. Indeed we also included mid-cap trackers from the IA UK All Companies sector in our average tracker performance.

Could it be that the rise of passive money coming into the market is making it easier for active managers to outperform? Intuitively this makes sense – passive money is blind, it won't react to market information. At some point, if there is too much passive money in the market, it should be easier for active managers to outperform with their superior information. However, passive investments still only make up 11% of the UK market and there is no evidence to suggest this has had any effect yet.

Perhaps the simplest explanation is that many fund managers are actually very good at consistently beating the market. Over 50 actively managed UK All Companies funds returned more than 100%, or over 40% more than the benchmark over the past five years. Nine of those funds were on the Chelsea Selection. We believe that with a bit of research, investors can quite easily select excellent fund managers and avoid the bad closet indexing active funds which will always underperform. Websites such as fundcalibre.com provide investors with a wealth of free information and research. Ed Leggett, Nigel Thomas, Neil Woodford, Alex Savvides, Thomas Moore and Steve Davies are all just a few Elite Rated UK manages who easily beat their peers and the index over the past five years (see graph). So despite the rhetoric, investors were substantially better off in actively managed funds. 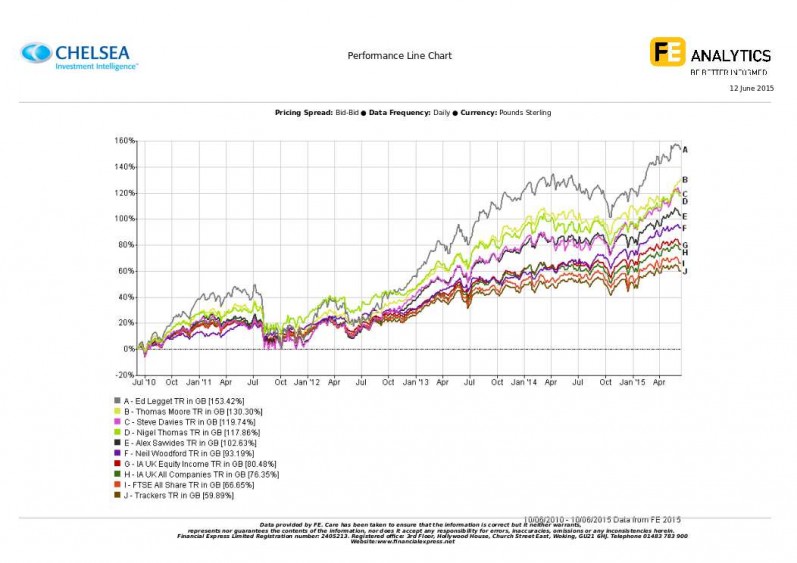 It's time to set the record straight and put forward a counter argument against the passive surge. I'm not saying that passive investments are bad or don't have a place in investors portfolios. In some other markets active managers haven't been nearly as successful as in the UK, most notably in the US. However, we need to hear a balanced argument with the real facts. Thus far, the active management industry has done a poor job of defending itself, and no one has been willing to stick their neck out. Over the past five years the numbers speak for themselves active managers have not just beaten but have crushed their passive counterparts. Investors have a right to the correct information before they make their investments. The academics who argue that a tiny proportion of active managers beat passive investments need to go back to the drawing board.

Past performance is not a reliable guide to future returns. You may not get back the amount originally invested, and tax rules can change over time. James' views are his own and do not constitute financial advice.