Despite the squeeze on budgets, caused by rising inflation and slow wage growth, consumers have been the major driving force behind Britain's rapid economic recovery.  Figures out today (29th April) show that the UK economy has grown by a further 0.8% in the first quarter of this year, fuelled by unexpectedly strong consumer spending in March. While in general this is good news, it has raised concerns that the recovery remains too dependent on unsustainable growth in consumer spending. The recovery needs to broaden out.

While the man on the street has been spending, corporate Britain has been keeping a tight hold on the purse strings for a good few years now. Having survived the global financial crisis, businesses have, quite rightly, been rebuilding balance sheets and getting on to a much firmer footing for the future. The only cash that has left the building has been in the form of dividends or share buybacks. It's a similar story in other developed economies and even some emerging economies.

But are things finally about to change and the much needed broadening out of the economic recovery to begin? In February, financial data provider Markit released its manufacturing survey, saying that companies that make plants, machinery and IT equipment etc, have seen the strongest rise in new orders in nearly 20 years. The survey also revealed that domestic orders are rising more quickly than export orders, suggesting that UK companies are leading the way when it comes to finally spending some of the cash pile.  If Markit are correct, when we look back at the first two quarters of this year, investment spending should look pretty strong.

At the beginning of April, Fidelity also released the results of a survey it carried out amongst its European and Asian analysts. The survey suggested that the strength of the economic recovery and diminishing fear of further financial crises are underpinning growing optimism among businesses. Fidelity's analysts expect mergers and acquisitions to be the main beneficiary, while capital expenditure is expected to recover at a relatively slow pace.

Then, at a recent meeting with Kames Capital fund managers, I came across another graph showing a recent Deloitte Chief Financial Officer (CFO) survey. 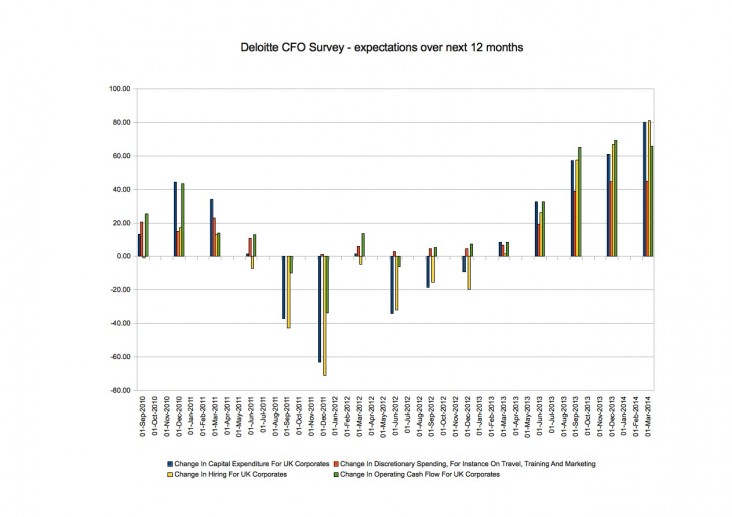 There has been no big macro crisis for nearly two years now and money is starting to burn a hole in the pockets of CFOs. But how will they spend? On new capital? Mergers or acquisitions? Media budgets? Increasing the workforce? The graph suggests all of the above. If this is the case, then a number of sectors and companies should benefit. IT companies that specialise in equipment rather than virtual storage etc, are an obvious place to start, as are recruitment agencies and media companies. Kames prefer the latter two.

But what is the catalyst for the change of heart? Well, the timing of the increase in confidence seems to coincide with the arrival of Mark Carney at the Bank of England, and the start of forward guidance. Perhaps this has given businesses the confidence they needed. There is also the possibility that investors are now pushing hard for companies to actually invest in their operations and growth plans. Whatever the reason, an increase in corporate spending would certainly help the economic recovery continue apace, without having to rely on the consumer.

Past performance is not a reliable guide to future returns. You may not get back the amount originally invested, and tax rules can change over time. Darius' views are his own and do not constitute financial advice.
Published on 30/04/2014