Brexit negotiations begin this week, almost exactly a year to the day since the UK voted to leave the European Union.

While all eyes have been on the UK's largest companies as the FTSE 100 has continued to make new all-time highs over the past 12 months, European equity funds have actually been better investments than their UK peers.

We compared the performance of all European and UK equity funds* since 23rd June 2016 and found that just nine UK funds made it into the top 100, in terms of percentage returns.

European Smaller Companies funds have fared the best on average with returns of 34.72%, followed very closely by the IA Europe ex UK sector with 34.18%. Of the UK funds, those investing in UK Smaller Companies did a lot better than the wider IA UK All Companies sector, with average returns of 26.30% and 19.41% respectively.

With so much uncertainty still ahead of us, it is quite possible this trend will continue in the short term at least, especially as European markets are less overvalued and many of their economies look to be in better shape. Positive growth numbers on the continent are coming into focus now some of the contentious national elections are out of the way.

Top ten European and UK equities funds over the 12 months since the EU referendum: 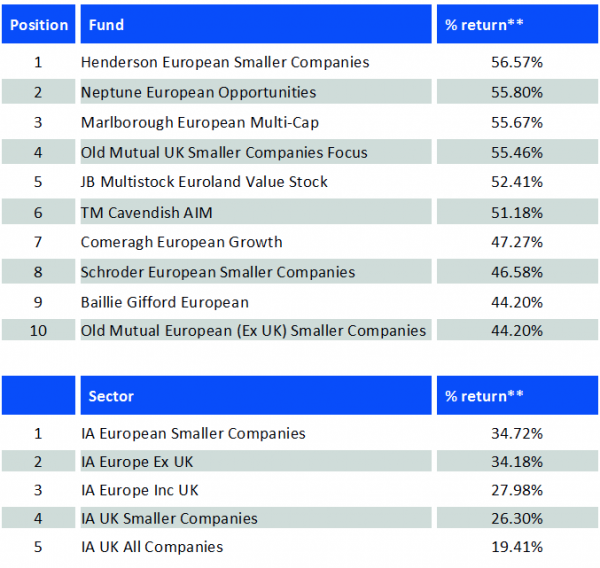 Past performance is not a reliable guide to future returns. You may not get back the amount originally invested, and tax rules can change over time. Darius's views are his own and do not constitute financial advice.
*Source: FE Analytics, all funds in the IA Europe ex UK, IA Europe inc UK, IA European Smaller Companies, IA UK Smaller Companies and IA UK All Companies sectors.
**Source: FE Analytics, total returns in sterling, 23rd June 2016 to 19th June 2017.
Published on 20/06/2017