Naughty and nice investments in 2016

The festive season is well and truly upon us and my childrens' Father Christmas list had been growing at an exponential rate, so I'm rather glad that it has now been posted. On the whole they've been nice this year, so Christmas morning should be fun.

Speaking of the man in the red and white suit, things were looking quite good in terms of a 'Santa Rally' this year. The FTSE was up nearly 3% over the first 14 days of December*, but the index has come off a little today. Having broken various record highs earlier on in the year, it seems to have hit the brakes and the jury is still out.

So rather than trying to guess what the next couple of weeks will mean for investments, let's take a look back and see which funds have been naughty and nice this year.

Top of the nice list is WAY Charteris Gold & Precious Metals, with a staggering 125.05%** return this year. It is one of four gold funds in the top ten performers this year. It's quite a turn around compared with the past few years, when the asset class has struggled.

Commodities generally have had a return to favour. Having been the worst performers last year, the bounce this year has been quite phenomenal. And commodity-related countries have been carried along with them – Brazilian and Russian equities in particular doing well in 2016.

Moving onto the naughty list, FP Argonaut Absolute Return takes that unwanted crown, falling more than 25% this year. A number of hedge-fund like absolute return funds are amongst the worst performers, which will no doubt lead to more bad headlines about the sector. Our opinion is that this type of fund is too volatile to warrant an 'absolute return' badge and they should be in a separate sector. The absolute return sector should just comprise of these funds with low volatility and low maximum drawdown.

Looking ahead to 2017 and I think markets could continue to be volatile. We have more elections in Europe, Trump moving into the White House and, of course, Brexit. Diversification is likely to be key. 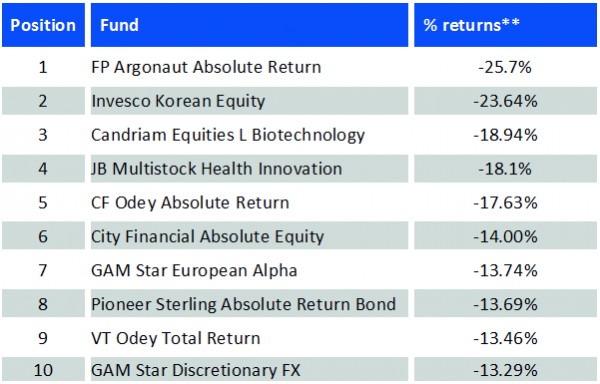