Investing isn't easy. Even the best fund managers hit bad patches and their investors have had to show immense mental strength in the face of some heavy losses. Despite this, over the long term, funds with certain characteristics can do extremely well.

Here are four of our favourite managers and funds, which have all been at the top of their game for a number of years, and what can they teach us about the characteristics which investors must possess in order to succeed – I must warn you, this is a heavy dose of cherry-picking, but all the better to illustrate a point!

Probably one of the most notorious and well known funds. Since its launch in 1987 it has so far returned an astonishing 2,750%. An initial investment of £10,000 would be worth £275,000 today. Although the long-term performance is exceptional, the fund has experienced very difficult periods. At the height of the tech boom, the fund lost 23% of its value in just nine months, while the UK stock market (FTSE All-Share) fell by just 2%*.

Would you have stayed invested in a fund which appeared to be in free fall? Hopefully you would have done if you understood the reasons for the underperformance – the then manager, Elite Rated Neil Woodford, refused to get caught up in the technology bubble. It was a painful time but his conviction paid off. 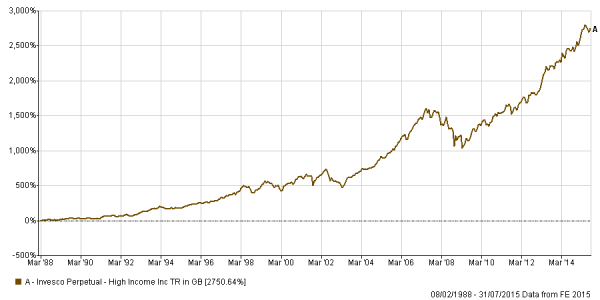 Invesco Perpetual High Income underperformed the market by 21%  in just nine months*. Would you have invested in this fund? 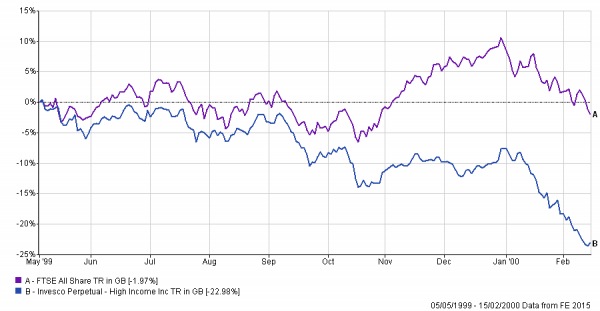 Aberdeen's team-based approach has traditionally worked well in emerging markets. This Elite Rated fund, has proven to be one of the best ways to play the rise of Asia over the past 28 years. It has returned 2,078% since its launch in 1987*. 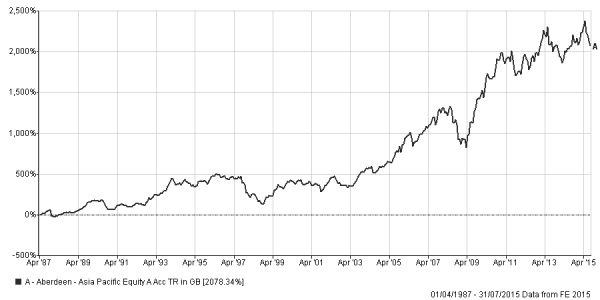 Despite the incredible long-term performance, the fund has been through some extremely difficult periods. In 1997 it was caught up in the Asian financial crisis and lost 65% of its value in just 15 months*. A huge loss by any account, investors lost almost all their returns from the previous decade. What now looks like a small blip on the graph above was in fact a massive correction. It took tremendous nerve to remain invested after such a massive loss. Following three years of sub-par performance more recently, perhaps investors should once again ask if they should be holding their nerve?

Any investor would feel the pain of such a huge loss 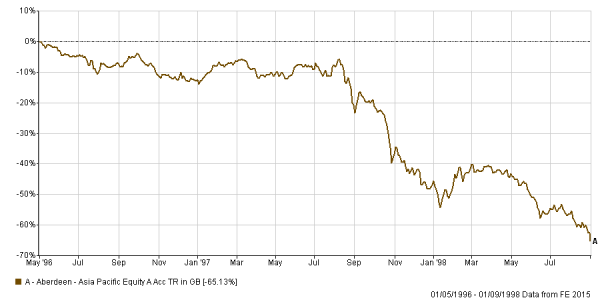 Elite Rated AXA Framlington American Growth is one of our long-term favourite US equity funds. However, following a short initial bounce, the fund (and indeed the US market generally) went nowhere for almost six years between July 2003 and March 2009, returning just 2.8%*. The UK market returned 20% in the same period*. 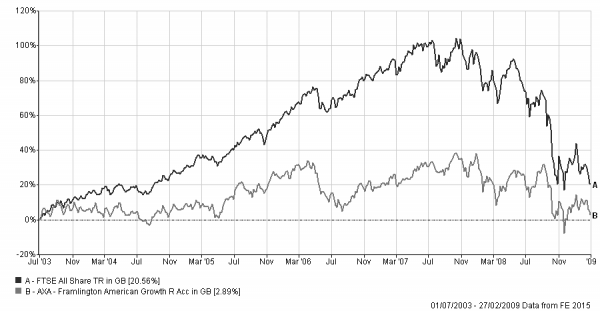 UK investors are generally very underweight the US market. It represents around 50% of global companies, but most of us own less than 5%. With numbers like this, why would you show any patience with the market? Because since launch, the fund has returned almost 800% - almost double the returns of our home market*. 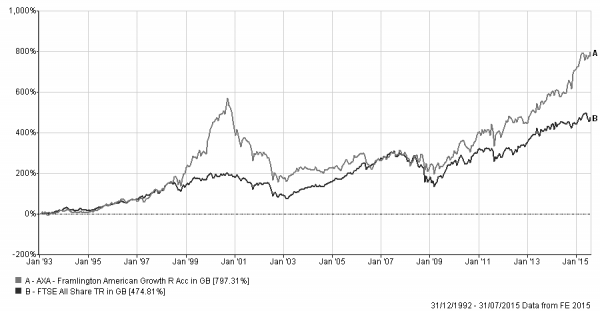 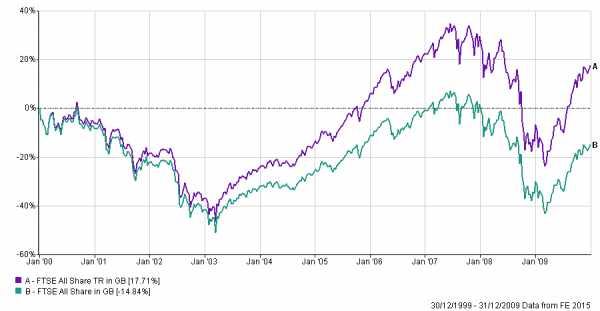 If you invested your money in the FTSE All Share at the end of 1999, over the next 10 years you would have lost 14.8%*. If you had reinvested your dividends, however, you would have made a positive return of 17.7%. Translate this onto a good actively managed fund that is looking for growing dividends, like Elite Rated Rathbone Income, and the difference is even more compelling. On a price return basis it made 28.7% for investors, but if you had reinvested dividends you would have made 94.9% over the period – almost 80% more than the index*. 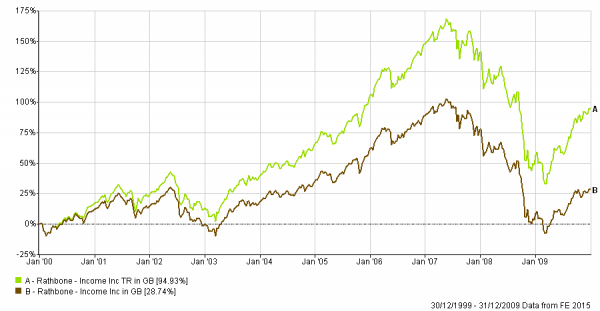 *Source: FE Analytics as at 31/07/2015 or within date range indicated on accompanying graph.

Past performance is not a reliable guide to future returns. You may not get back the amount originally invested, and tax rules can change over time. James' views are his own and do not constitute financial advice.